Part of the benefit of running a consulting firm is that you have access to thousands of developers and should you be inclined to help them, they will typically help you as well. I’ve long been a proponent of better business education for our development community. We work in a time when a career in games means “being in constant fear of losing your job” and companies like Activision lay off 800 people after posting record revenue (then turns around and admit it may hurt more than help). We can’t stop the ArenaNet, Activision, and TellTale situations from happening, but we can do something to give those who were laid off another option.

My desire to educate developers on the business of games has been around for a long time. I’ve been in this industry for more than two decades and I’ve always been on the business side of the spectrum. That lead to a revelation nearly 10 years ago. I realized that a lot of the knowledge that I (and others in the industry) had, wasn’t common knowledge. We took it for granted, I assumed every developer knew how to vet a publisher or research the best publishers in the first place.

How Can We Educate Indie Developers?

Initially we started writing whitepapers, as business people that’s where we assumed everyone got their information.

No one read them. We gave them away for free, we posted them to social media, we emailed them out to developers. Didn’t matter, no one read them. Then in 2017 we did a massive survey to hundreds of developers (577 to be exact). We wanted to find out what the biggest issues were for indie developers. One of those questions was “How do you prefer to consume knowledge”. The results shocked me. 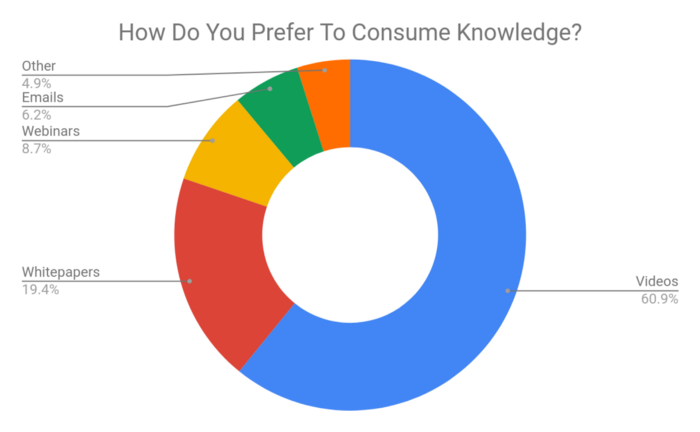 Based on surveys from over 500 global game developers

Because I personally didn’t get a lot of my news and knowledge from videos, I mistakenly assumed few other people did either. This revelation led to the creation of our Twitch show “Indie Game Business”. Twice a week we go live and teach various aspects of the business of games, either on our own, or with the guests that we bring on to the show. Then those shows are archived on our Twitch channel as well as our YouTube page. We also curate lectures from other conferences that pertain to the business, marketing, and licensing side of games. All together we have built a nice library of videos that developers can easily search through. Problem solved! Right?

It turns out that although I’m great at selling and marketing games themselves, I suck at marketing and promoting a Twitch channel. So we’re constantly trying to get the word out and help these teams.

Now we are doing our part to get the knowledge “out there”, so what’s the next step? My second biggest issue with the industry is the sheer cost of networking and doing business. I’ve long said that the people who REALLY need to be at GDC and other conference to hear these speakers simply can’t afford it. A “Conference Pass” to hear the lectures at GDC will cost up to $1,500, hotels run $300 to over $1,000 per night, and THEN you have to get a flight. That’s why we’ve seen smaller, more regional shows pop up over the years. It’s more economical for the teams to participate this way.

With all this in mind we started looking into a new option around six months ago. To make the event economical for indie’s we decided to go all digital. This wasn’t an original idea, we’ve seen these conferences pick up momentum over the last two years. ProIndieDev and the Business of Indie Game Summit. Both of these programs are 100% online and focused on the distribution of video lectures. Given our existing show which does something similar each week, we didn’t feel this was direction we needed to go. So again, we reached out to indie developers to get their feedback. What did they want out of a digital conference?

Here’s are quotes from two companies I spoke with on Discord:

“Cost is hard to justify sometimes unless you have meetings scheduled. Most talks are recorded and available for free later. Going for potential networking can be hit and miss.”

“I think most young indies would say: “money”… I myself just get a bad chill with most of the speakers, since I rarely met someone who told me that speaker X opened up the way for them to achieve Y (actually no one yet)”

When it came to who they wanted to meet with, 74% said publishers, 49% said influencers, 20% said service providers, and nearly 40% said PR and marketing companies. We knew then that there was a need.

With that in mind we partnered with MeetToMatch to provide us with the backend solution we needed to make meetings happen. They handle meeting matchmaking for Devcom, QuoVadis, the Nordic Game Conference and they have over 750 companies using their system for shows like GDC.

Now we’re bringing developers, publishers, service providers, sponsors, and influencers together for the first online business matchmaking event designed with indie developers in mind. There are no flights to book, hotel rooms to reserve, and expensive passes to buy. For as little as $85, companies can come together on April 15th and 16th this year. All a company needs is a laptop and headset.

Is it going to solve the issues in the industry that we see with Activision and Telltale? No. But it’s an opportunity to help indie’s grow their network and make their games more successful.

I hope you’ll join us in this new endeavor. We want to make this a safe and successful space for as many companies as we can.

You can find information on our next event here.

Showcasing Your Indie Game At a Physical Or Virtual Expo

How To Make Your Game Stand Out At a Virtual Conference

Jay has successfully negotiated and closed countless deals for licensing, development and distribution over the past 20 years. His consulting firm, The Powell Group, focuses on building positive relationships between various forms of media and the game space, and helping a wide variety of clients succeed in the video game industry. The firm tracks over 4,000 developers and another 750+ publishers globally. In 2018 he founded the "IndieGameBusiness" initiative which produces both a weekly podcast and hosts multiple virtual business conferences each year.